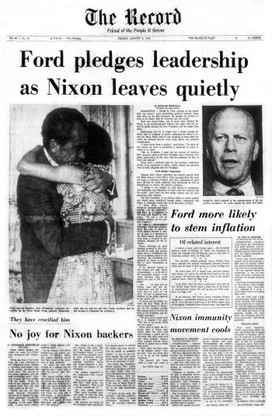 On Thursday, August 8, 1974, the 37th President of the United States, Richard Milhous Nixon, announced that he would resign, leaving Gerald Rudolph Ford to serve out the rest of his term, picking up the pieces after the nation’s most devastating political scandal. This classic front page of The Record from Friday, August 9, 1974, captures the disconcerting and emotional moment following a conspiracy that our nation will never forget.

This 13" x 22" black-and-white front page reprint is produced on quality matte paper and is available framed.