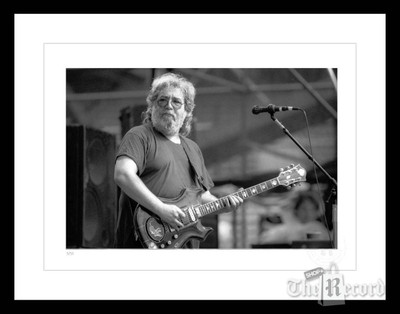 Portraits of Rock series “Jerry Garcia, 1987” The Grateful Dead legend himself is captured in this stunning performance portrait by Record photographer Danielle Richards while in concert at Giants Stadium in East Rutherford, NJ, on July 12, 1987.

This exclusive fine art presentation of this image is being produced in a limited quantity of 50 numbered and framed giclee prints, produced using Baryta paper which gives greater detail, extended tonal range and excellent archival properties. The inks are also archival, and mounted behind glass in a black 24" x 30" wood frame with a double-thick matte. Image measures 14" x 22".