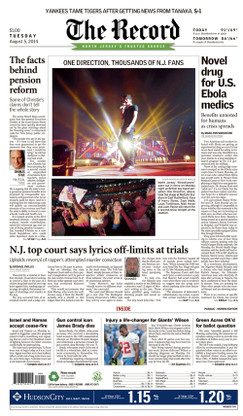 "One Direction, Thousands of N.J. Fans" reads The Record's headline of the day on Aug. 5, 2014, as North Jersey “Directioners” were out in force as British boy band sensation One Direction took the stage the night before at MetLife Stadium in East Rutherford. The fans of Harry Styles, Zayn Malik, Louis Tomlinson, Niall Horan and Liam Payne would return for a second show the following night at the stadium.

This 13" x 22" full-color front page reprint is produced on quality matte paper and is available framed.