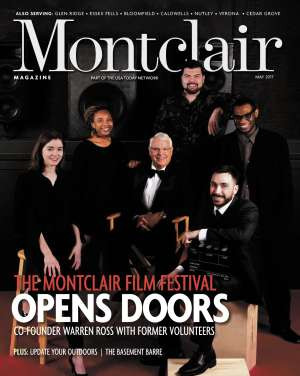 FROM FESTIVAL TO FILMMAKER: THE NEXT GENERATION: The Montclair Film Festival opens hearts and minds, but for these former volunteers, it has done more: Their MFF experiences and connections have opened doors to their careers.

RAISING THE BARRE The eclectic art featured throughout this house reveals the expressive sensibilities of the homeowners, who converted their basement into a dance studio.

PATRON OF THE ARTS Sixty-year Montclair resident Warren Ross got involved in the Montclair Film Festival on the ground level – that is, when it was merely an idea brought to him by Stephen and Evie Colbert. Today, MFF’s new three-level building on Bloomfield Avenue attests to their success.