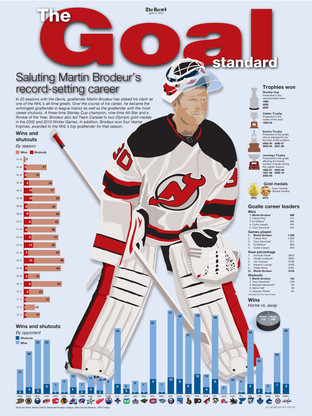 From the art: "In 20 seasons with the Devils, goaltender Martin Brodeur has staked his claim as one of the NHL’s all-time greats. Over the course of his career, he became the winningest goaltender in league history as well as the goaltender with the most career shutouts. A three-time Stanley Cup champion, nine-time All-Star and a Rookie of the Year, Brodeur also led Team Canada to two Olympic gold medals in the 2002 and 2010 Winter Games. In addition, Brodeur won four Vezina trophies, awarded to the NHL’s top goaltender for that season."

This custom-reproduced Record illustration by staff artist R.L. Rebach is brimming with statistics and graphs surrounding NJ Devils' Martin Brodeur 2014 record-setting career. This commemorative and colorful art piece is reproduced as it appeared in The Record on April 15, 2014. Makes a great gift for any Devils or hockey fan in your life.