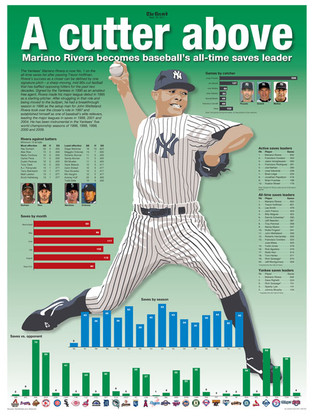 From the art: "The Yankees’ Mariano Rivera is now No. 1 on the all-time saves list after passing Trevor Hoffman. Rivera’s success as a closer can be defined by one signature pitch – a sharp-moving, mid-90s cut fastball that has baffled opposing hitters for the past two decades. Signed by the Yankees in 1990 as an amateur free agent, Rivera made his major league debut in 1995 as a starting pitcher. After struggling in that role and being moved to the bullpen, he had a breakthrough season in 1996 as the setup man for John Wetteland. Rivera took over the closer’s role in 1997 and established himself as one of baseball’s elite relievers, leading the major leagues in saves in 1999, 2001 and 2004. He has been instrumental in the Yankees’ five world championship seasons of 1996, 1998, 1999, 2000 and 2009..."

This custom-reproduced Record illustration by staff artist R.L. Rebach is brimming with statistics and graphs surrounding NY Yankees' Mariano Rivera's 2011 record-breaking career. This commemorative and colorful art piece is reproduced as it appeared in The Record on Sept. 20, 2011. Makes a great gift for any Yankees or baseball fan in your life.

This 18" x 24" poster print is reproduced on quality matte photo paper and is also available on ShopTheRecord.com as a 13x22 framed or unframed version.