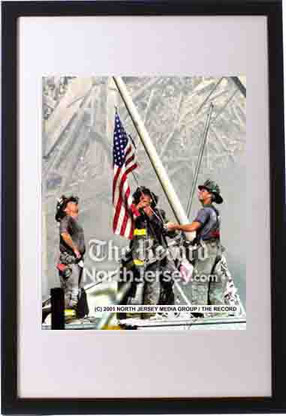 (A portion of the proceeds of this sale benefit the Disaster Relief Fund. Purchased image does not contain watermark.)

In the aftermath of the attacks of 9/11, amid the chaos and rubble where the World Trade Center twin towers once stood, Record photographer Thomas E. Franklin captured an unforgettable image of hope - three New York City firefighters raising the American flag. This poignant photo has resonated in the hearts and minds of Americans and people around the world.

Standing defiantly against the gray and white landscape of devastation, these dust-covered men and the vivid red, white and blue of Old Glory instantly became a symbol of American patriotism.

The Record's photo of these three heroic rescuers - Brooklyn-based firefighters George Johnson of Rockaway Beach, Dan McWilliams of Long Island (both from Ladder 157), and Billy Eisengrein of Staten Island (Rescue 2) - also became a global message that life, and America, would go on.

The photo, which appeared on Sept. 12 in The Record, has since graced the pages of many other newspapers as well as national newsmagazines. Network television has repeatedly displayed the photo during its round-the-clock disaster coverage, comparing it to the famous image of Marines raising the flag on Iwo Jima during World War II.

Franklin, an eight-year veteran of The Record, took the photo late in the afternoon of Sept. 11, after spending hours at the scene. He was walking toward the debris of the World Trade Center when he spotted the firefighters.

"The shot immediately felt important to me," Franklin said. "It said something to me about the strength of the American people and about the courage of all the firefighters who, in the face of this horrible disaster, had a job to do in battling the unimaginable."

This striking image measures 16x20 and is presented in a 20x30 black wooden frame with matte.