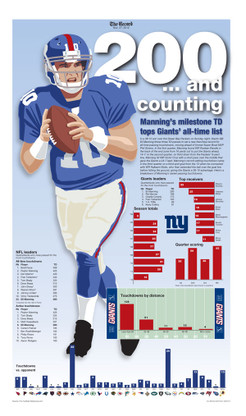 From the art: "In a 38-10 win over the Green Bay Packers on Sunday night, Giants QB Eil Manning threw three TD passes to set a new franchise record for all-time passing touchdowns, moving ahead of former Super Bowl MVP Phil Simms. In the first quarter, Manning found WR Rueben Randle in the back of the end zone from 16 yards out to put the Giants ahead, 14-7. In the second quarter, on third down from the Packers’ 9-yard line, Manning hit WR Victor Cruz with a short pass over the middle that gave the Giants a 24-7 lead. Manning‘s record-setting touchdown came in the third quarter on a third-and-goal from the 13 when he connected with WR Hakeem Nicks, who then extended the ball over the goal line before hitting the ground, giving the Giants a 38-10 advantage. Here’s a breakdown of Manning’s career passing touchdowns..."

This custom-reproduced Record illustration by staff artist R.L. Rebach is brimming with statistics and graphs surrounding NY Giants' Eli Manning's 2012 record-breaking career. This commemorative and colorful art piece is reproduced as it appeared in The Record on Nov. 27, 2012. Makes a great gift for any Giants or baseball fan in your life.

This 13" x 22" front page print is reproduced on quality matte photo paper and is available with a framing option. Also available in an 18x24 poster format.