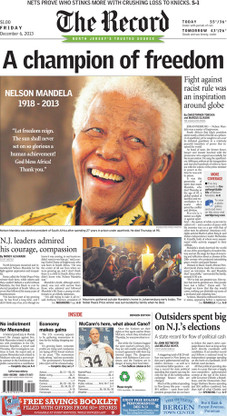 A Champion of Freedom reads The Record's headline of the day on Dec.6, 2013, with the news of the death of 95-year-old Nelson Mandela. North Jerseyans mourned and remembered Mandela for his fight against oppression and inequality. Some called the Nobel Peace Prize winner their hero, while others said they couldn’t fathom a world without Mandela, the first black to ever be elected president of South Africa, an event that followed his many years of imprisonment.

This 13" x 22" full-color front page reprint is produced on quality matte paper and is available framed.